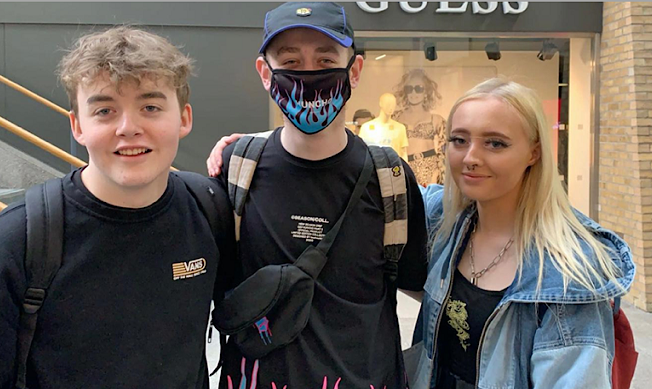 U105 presenter Carolyn Stewart gave a lovely shout out recently to some of our Level 3 Creative Media Production students at Millfield. The second-year students, who are studying on the Film pathway, helped Carolyn to develop advertising for her new sauce product ‘Carolyn Stewart’s Totally Hot’ and have been working with her as part of their Working Brief unit.

Carolyn was so impressed by the work our students produced that she thanked them all by name on air. She also talked about how the Film and TV industry is still really booming in Northern Ireland, and how this could be a really exciting career pathway that young people should consider.

Craig Gibson, lecturer in the Belfast Met Film & Television School, who was delighted with the end result, confirmed, “The students were studying a unit called ‘Working to a Brief in the Creative Media Industry’, where they were given a live client brief, which in this case was to create an advert for Carolyn Stewart's new line of sauces.

“They had to make a short promo for it, so they communicated with Carolyn and decided to make a stop-motion video. It is 18 seconds long and really impressive, almost TV or Tik Tok ready, so I’m very proud of what they have achieved. Some of the six students in that group that took part in creating this video are planning to progress to either the HND in Creative Media Production (Film) or (Documentary – Moving Image and Audio).”

Carolyn also mentioned the HND Creative Media Production course in Factual Television and Journalism at the Belfast Met Film and Television School located in the college’s e3 campus, and the kinds of exciting new skills that students could learn on that course.

Carolyn who has been developing her artisan, award winning sauces Totally Hot brand since 2016, said, “ I was so delighted with the advert that the students produced for the new additions, as they did such a good job and this has really helped me as a small independent business owner with promoting new additions to my product range.

“I wanted to give the students the recognition, as they had done such a fantastic job, and hopefully this will give them a boost and encourage them to keep going and to keep on developing their talent.”

Watch the advert that the students created here