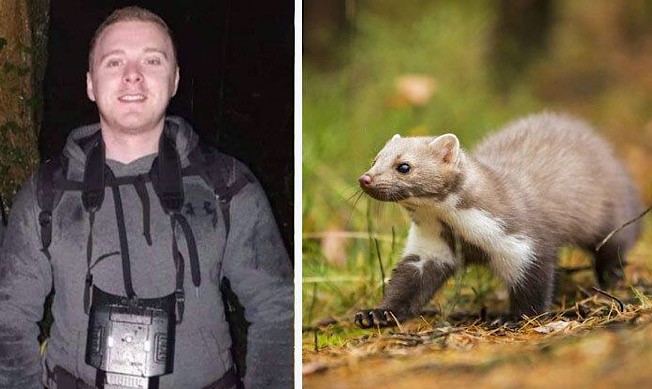 Belfast Met Level 3 Animal Management student, Aaron Kelly, made an amazing discovery on the Belfast Hills during his investigative project. His year-long project’s objective was to find out if pine martens, a native Irish ferret-like animal, existed in the Belfast Hills, as they are mostly found in west and central parts of Ireland. Thanks to his project’s findings, he’s now able to work towards making the Black Mountain a protected green space. It’s also hoped that the pine marten will help the endangered red squirrel as they will be more likely to catch and eat grey squirrels.

Aaron, who is passionate about conservation and protecting our wildlife, has kept an eye out for any signs of the pine marten when walking in the Belfast Hills near his home for several years. He discovered some droppings that were possibly from a pine marten, and with the support of his lecturers, the evidence he found from his project far exceeded all expectations. The trail camera he had set up in the hills captured a photograph of a pine marten late at night in January this year. His discovery has prompted some media attention, including a recent interview on NVTV.

Belfast Met lecturer Dawn Corbett, confirmed, “Aaron is required to carry out an independent research project as part of the second year of Level 3 Animal Management.  He has shown such commitment, enthusiasm and passion throughout the process, and we, as the teaching team, are thrilled that he has had such positive results.  This remarkable project, Aaron’s passion for wildlife conservation and his desire to educate others in this area are so inspiring, especially in these difficult times.”

Aaron spoke about what the discovery meant to him: “The findings from my project have opened a lot of doors for me, as I’m hoping to work on the Belfast Hills Pine Marten Survey and have been offered work on other surveys like the Badger Survey. I’d like to go on to study Level 5 in Animal Management at Belfast Met, as this qualification will help me to progress my career plans of working in conservation.

“Some people I’ve spoken to claimed that they had spotted stoats in the hills, which are only after active after dark. With the landowners’ permission and the help of my friend Conor Smyth, we watched night after night from December for six hours at a time using night vision binoculars, in the hope of seeing a pine marten.

“It was really great to be able to use the skills I’ve learnt for this research and I can’t thank my lecturers enough for the support they gave me to complete my investigative project. I feel very strongly about the importance of protecting our areas and the wildlife in it. My discovery of the rare pine marten has meant that the Belfast Hills could now be protected which is very important to me, as it is the last large green space in the Belfast area.

“I’m on the right path to pursue my career goals and would love to have the opportunity to teach young people in the future about the importance of looking after the natural world, and how they can protect our natural environment.”

Aaron has been an exemplary ambassador for the College, and we wish him well with his future endeavours in protecting our wildlife for generations to come.

Find out more about Animal Management