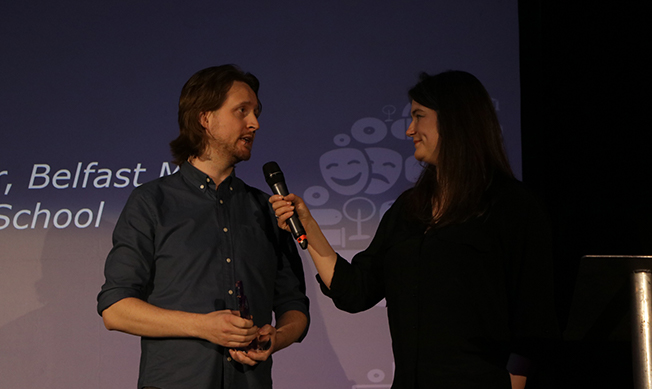 Belfast Met has won for the second consecutive year at the Creative and Cultural Skills NI Awards, which recognizes individuals and organisations whose outstanding work is ensuring the UK's booming creative industries have the skilled workforce needed for continued success.

Tutor Darren Porter uses his experience working on Hollywood blockbusters to inspire the next generation of film and television students to achieve the highest level and now the he has won the Tutor of the Year award in the Northern Ireland Creative & Cultural Skills Awards for his inspirational work.

The NI Creative & Cultural Skills Awards celebrated the outstanding work of young people in the creative industries and those from industry and education who help them along the way.

Visual Effects tutor Darren was instrumental in helping the college team set up the new Belfast Met Film and Television School, launched just last year. Having worked on films such as Looper starring Bruce Willis and Adam Sandler’s Jack and Jill, Darren was able to talk about real life projects and to use his extensive contacts to bring experienced speakers to the college to talk to the students.

“This industry is crying out for skilled, experienced people. There are great jobs out there but young people need real vocational skills, they need work experience and to understand how to build a good network around them. That’s what the Belfast Met Film and Television School is all about and I couldn’t be more proud of our students who have gone on to do such amazing things,” Darren said.

Belfast Met’s Director of People, Policy and Planning, Gillian Magee said: “I would like to express my congratulations to the amazingly talented winner of the Creative and Cultural Skills NI Awards our own Darren Porter.

“The college places a strong emphasis on its creative provision at the Belfast TV & Film School. We pride ourselves in our excellent industry standard facilities, and in the teaching staff who have vital industry experience in their respective fields which is invaluable when instilling the insider knowledge and know-how that’s required to work in the creative industries.”

Curriculum Area Manager, Alan Serplus said, “The Belfast Met Film & Television School will only be one year old next week, and the staff and students have consistently shown that they are at the cutting edge of the media industry. Just after the launch in 2018 Alan McCracken and Dr Thomas Scott were awarded the regional CCS NI Creative Tutor of the year award, and the school was shortlisted for the CCS UK Educational provider of the year in Cardiff. Following this up were three Royal Television Awards and three Highly Commended together with various other commendations from festivals and personal student achievement, and VFX students obtaining credits on Captain Marvel and Games of Thrones.

“It is with great pride that again the Belfast Met Film & Television School has been so successful in the regional Creative and Cultural Skills 2019 Awards with Darren Porter the VFX co-ordinator taking top spot in the NI Creative Tutor of the year category, along with Alan McCracken & Dr Thomas Scott in conjunction with Flash Harry receiving Highly Commended awards for the NI Education and Industry Collaborative Project Award.”