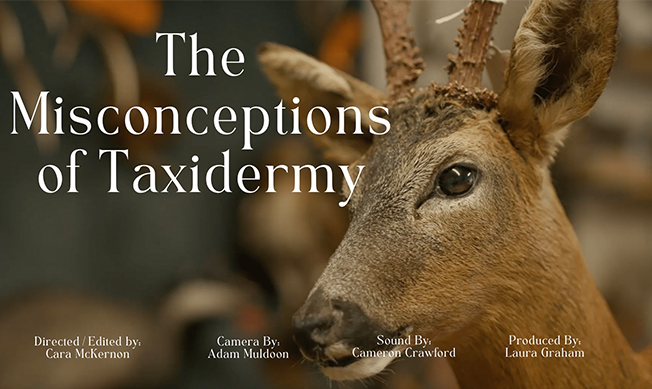 The Inter-College awards were hosted by Southern Regional College this year where Belfast Met faced some stiff competition and received a total of three awards. 'The Misconceptions of Taxidermy' took first place in the Factual Strand; the film gives a stunning insight into the work of Bangor based Taxidermist Ingrid Howers whose knowledge and anecdotes on the subject are beautifully explored.

The Documentary investigates the origins, culture and history of an of an artform that aims to immortalise and celebrate nature. Judges gave very positive feedback on the quality of the colour, the edit and the cinematography. The second year Level 5 HND Film students included Cara McKernon (Director and Editor), Adam Muldoon (Camera), Cameron Crawford (Sound) and Laura Graham (Producer). Also on the crew was Jamie Edgar, a first-year student on the new HND in Documentary who assisted as Second Camera.

Our first year HND Film students also excelled as they won runner up prizes, as did one of the HND Videography/Photography students. First year students took third place in ‘Fiction’ which involved students in acting and crew roles. The film was directed and filmed by Luke Galbraith, starred Dean Wilson and Niall Mcnelis, and other crew included Joel Rafferty as Assistant Director and Aaron Connolly who was the Sound Technician.

In second place was first year student in HND in Commercial Photography and Videography Lois O'Kane, who came second for her photography. The three awards will provide students with a small fund that they can put towards future projects.

The project was the result of a unit in Documentary led by lectures Lynda Bryans and Madeline Whiteside from the School of Creative and Digital Industries who said: “Congratulations to everyone involved who worked so hard to achieve this high standard of work. This is a real triumph for the College, and we hope to see more from this talented crew.”

Our students continue to excel through excellent delivery from the industry specialist teaching staff and access to the exceptional facilities in the Belfast Met Film & Television School studios at the e3 campus.