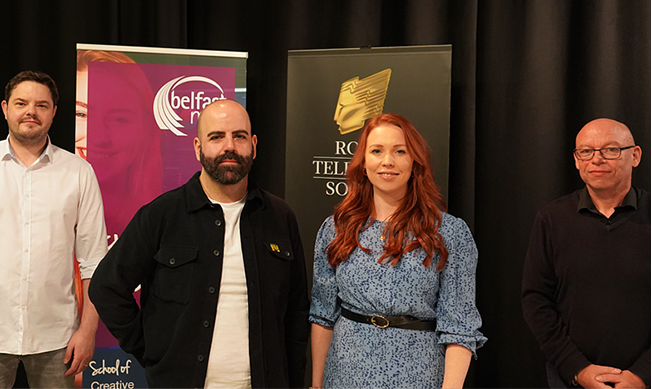 An exclusive Royal Television Society Northern Ireland (RTS NI) masterclass was held in the Belfast Film Television School’s film studio for our HND Creative Media Production students this week. Pascual Diaz who is Head of Creative Design at BBC Three, was interviewed at E3 by Maeve McLaughlin from Renegade Pictures.

Pascual is one of the most important practitioners in the industry to come and speak exclusively to Belfast Met students, which the committee of the RTS NI was able to arrange.

This was an extremely useful event for the Film and Television students, who also worked in the studio on the day. They heard how Pascual has navigated his career and had the opportunity to ask questions and get a real insight into the skills and experience needed to succeed in the creative industries.

Pascual Diaz started his professional career as a creative copywriter and evolved his profile to design and video. He joined BBC Three following his role as Creative Director for BBC News.

His current role at BBC Three includes creative direction, design, and motion graphics across various BBC Three teams for shows such as Normal People, This Country, Drag Race UK and Glow Up.

Aidan Browne, Curriculum Area Manager for Electronics, Media and Music, said: “It was a pleasure to welcome Pascual and Maeve to our studios as part of our ongoing “In conversation” programme which gives our students the opportunity to learn from leading Industry professionals.”

Pascual, added: “I was very impressed by the level of the equipment in the campus, with the passion of the teaching team and by the incredible creativity of the students.”