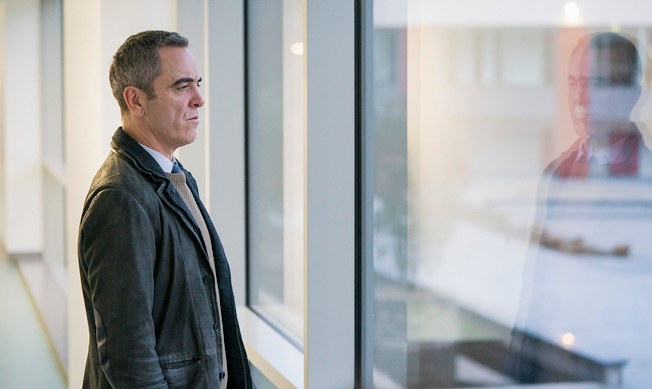 
Bloodlands is a new BBC drama series to look forward to on a Sunday night. Whether a fan of noir detective thrillers, or you simply enjoy location spotting around our wonderful City, there are plenty of familiar locations to look out for, notably the scenes filmed across the College campuses.

Although audiences here have been quite divided - there are a few unlikely story lines – Jimmy Nesbitt gives a great performance here. Any staff or students who watched the first two episodes will have seen many familiar spaces around the TQ and Springvale campuses. So far the first two episodes have featured many hospital scenes at ‘Belfast Met Hospital’ as well as exterior shots, including TQ’s front entrance, Jimmy Nesbitt on the 1st floor of TQ looking out onto the courtyard (pictured), the Fashion Store where they have added lockers to create a hospital staff area, and Café Met was used extensively in episode 2 recently.

The amazing facilities, at TQ Campus - as part of our portfolio of extensive venues for hire across the city - were chosen for the Bloodlands filming locations. Donna Convery, Commercial and Events Manager at the College, delighted with how the production has showcased our spacious, modern campus facilities, said, “We have worked with a number of production companies who have recognised the diverse and creative environments available to hire across the College estate, that translate with great impact on film and TV screen. The College has attracted film productions featuring Liam Neeson, as well as crew from a number of seasons of the hit BBC TV series Line of Duty, and The Fall. Production companies recognise the consistently high standards of facilities on offer, as well as the professional service and welcome they receive from staff and learners, as some of many reasons to continue to return to the College.”

Behind the scenes, three of our HND students were offered the opportunity to work on the production, Otis Daly, Maria Sloan and Chloe McAdam.

Alan McCracken, HND Film Production Course Coordinator, commented, “The Belfast Met Film and Television School aims to secure student experience through its many links with industry on professional productions and projects across film, documentary, advertisement and series productions as they study. This ensures that they have the skills and expertise needed to be work ready on completion of their HE qualifications.

"The objective of the Belfast Met Film and Television School is to give students the education, skills and experiences that will enable them to become more employable in the ever-growing media industry here in Northern Ireland and beyond. Bloodlands is just one example of the opportunities offered to our students and I'm sure the lessons learned on set will help develop each student's individual understanding of the production process while also helping them envision their future careers after graduation. Many thanks to HTM Television, BBC One and all the cast and crew of Bloodlands for collaborating with the college in making this invaluable experience happen."

Maria Sloan, HND Film and TV Production student, added, “The opportunity to work on the set of Bloodlands as a first-year film student was fantastic. It taught me so much about the day-to-day operations on a set and how production crews work together. Everyone was hands on and so efficient. This was a major BBC production and although the set was incredibly busy the cast and crew made time for us workplace students. They gave us advice and real-life industry experiences and I was even offered an additional week's work on set. To me, this demonstrates their passion for encouraging future talent in Northern Ireland. I loved every minute of it.”