Hats Off to Belfast Met For a Successful IFEX Launch 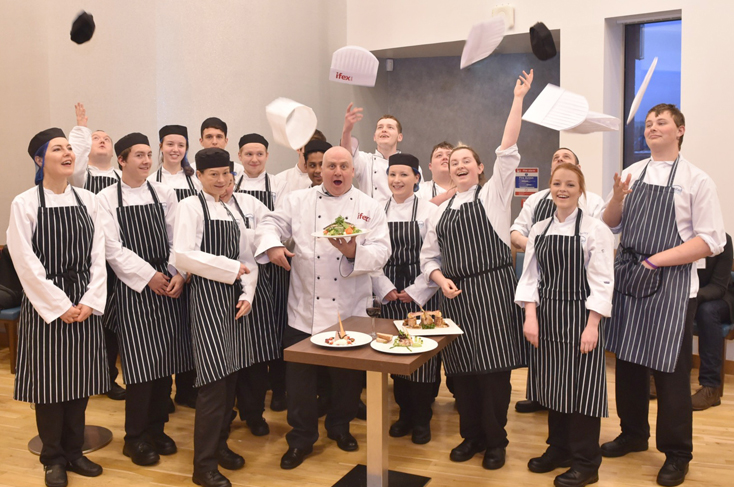 Belfast Met hosted the launch of the 2016 IFEX events taking place next year. The launch of Northern Ireland’s largest food, hospitality and retail event took place in Titanic Quarter Campus, in which culinary representatives and IFEX judges gathered from across Ireland and the UK, such as IFEX owner Tony Wand MD of Fresh Montgomery and Salon Culinaire Director, Sean Owens.

IFEX attracts approximately 5,000 visitors from the food, retail and hospitality sectors over three days. It’s the event where many of Northern Ireland’s most notable chefs - including Michael Deane, Chris Bell and Roisin Gavin - were first recognised and ‘ChefSkills’, which hosts approximately 250 industry and student chefs, remains the heart of the show.

IFEX 2016 is also an opportunity to celebrate what will be a significant year for the catering and hospitality industry in Northern Ireland, due to the heavily anticipated NI Year of Food and Drink. Harry Robinson, Belfast Met Curriculum Area Manager for Hospitality & Catering commented –

“2016 is going to be an exciting year for the catering and hospitality industry in Northern Ireland as we celebrate the Year of Food and Drink. This is a time for Belfast Met to show what our award winning students have to offer to restaurants and hotels as well as the wider tourism and leisure industry; whilst Northern Ireland continues to build its reputation as a culinary hotspot for visitors for the quality of its home grown produce and talent.”

The day consisted of presentations of the IFEX competitions to come such as Young Chef of the Year, City and Guilds Student Culinarian of the Year, and delegates had an opportunity to network with students, industry liaisons and business leaders in catering and hospitality.

Belfast Met will be supporting its student competitors who will be taking part at one of the longest running trade exhibitions in Northern Ireland from 8-10 March 2016 at the Titanic Exhibition Centre, Titanic Quarter Belfast.