Gerry Kelly Returns To The Telly 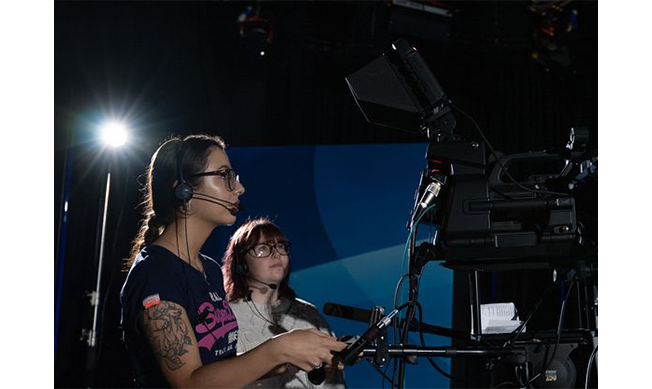 A team of veteran programme makers who worked on Gerry Kelly’s iconic TV chat show on UTV back in the day, have joined forces with Belfast Met students at e3 Studios and are volunteering their time and talents to bring “Tonight with Gerry Kelly” back to our screens for a run of 8 weekly programmes.

Recorded in front of a live audience in our television studio at the e3 campus, the 45-minute Friday night show features music and interviews with guests from the world of music, entertainment and showbiz including the cast of the Opera House Panto, Boyzone’s Keith Duffy, Louis Walsh, Brian Kennedy and many more.

It's a unique plan that came together when Executive Producer, Michael McAdam, owner of MovieHouse Cinemas, and who once worked at Ulster Television, got a group of his former colleagues together to see what it would take to produce a show from start to finish, from creating the set, the opening credits, booking the guests, recording and then broadcasting the show.

A link with another former colleague Lynda Bryans, once a UTV presenter and now Journalism lecturer at the Met, put the final pieces in place and the college gave permission for our fabulous studio and facilities at e3 to be utilised as a project-based learning experience for our students.

Michael McAdam said: “This is a real labour of love for all of us. Once you’ve worked in the buzz of a television studio, it never really leaves your system.”

And Gerry is delighted to be back working with his former colleagues and with the Met students. He said: “What a delight for us all to be able to pass on our many years of broadcasting experience to the next generation of TV, Radio and Film makers. This is a unique project involving the students from the Met in all aspects of television production.”

Higher Education students from a range of courses at Belfast Met have collaborated to bring this huge production together:

And as TV production, Documentary and Journalism students were hands on every week providing guest research for Gerry and taking hands-on practical roles in the studio including floor managing, camera operator, autocue, lights, sound, running and a range of other roles as required.

2nd Year HND Factual Television and Journalism student Ellie Mihaylova who is working on the production every week as a camera operator said: “There is a multi-camera studio set-up and I work alongside three retired camera men – David McBride, Gary Dixon and Mervyn Waugh – which has been an absolute pleasure so far. Shooting days can be quite tiring and demanding for all of us, but because the UTV retirees were colleagues for many years, working with them every Wednesday has been a breeze.”

Ellie added: “There are so many things I enjoy while working on set, I like that everything is so dynamic and fast paced – every week goes by so differently, that’s why I always look forward to next week’s recording. Also, there is nothing more satisfying than watching something that you’ve been a part of…and seeing your name in the end credits!”

Chris McKee, another 2nd Year HND Factual Television and Journalism student, has worked in different roles in the production: “This has been a great experience as I have learnt so much more during each show about how a production is put together. Over the last few weeks, I have had couple of different roles such as runner, autocue operator and sound assistant. I have really enjoyed all the roles that I have been given but I have particularly enjoyed being in the sound gallery and learning how important the sound department is to the production.”

Chris is hoping the experience will help him gain employment in the industry: “I think the highlight of the show for me is getting to interact with all the guests and being a part of the whole production team. After I graduate from Belfast Met, I think I would like to go further with the job that I have been given on the Kelly show as I have developed more of an interest in Television and Broadcast Journalism and I’m really enjoying what I am doing.”

And the show has gone down well with the audience, too. Patricia McGoldrick, who came to watch the show, said: “It was like a blast from the past when I saw the show come back on my television screen. Gerry is a very good interviewer and I thought the show had a good range and variety of entertaining guests which made it an interesting watch. I love how they include the students in the production giving them the chance to gain some real experience of the television industry.”

“Tonight with Gerry Kelly” has been running every Friday night on NVTV (Virgin Channel 159 or Freeview Channel 8) at 9pm and there’s a Christmas Special going out on Christmas Day, but you can stream the entire series at kellytonight.com.

On a personal note, as one of the students who has worked on the series as Studio Floor Manager, I want to say a big thank you for all the hard work that the UTV staff have put in and the knowledge and skills they’ve passed on to us as students. But also a big congratulations to all the students who have taken part in the show working alongside the professionals. And we all want to pay tribute to Ralph Campbell, a Sound Supervisor, who sadly passed away very suddenly during the series run. Ralph was a lovely, funny, kind-hearted and very special man who was giving up his free time to help and work alongside the students teaching them about sound. He will be truly missed by his former UTV colleges and family and as student, we will never forget him and all he taught us.